A LOOK BACK AT THE LONG HISTORY OF THE RAYGLASS PROTECTOR 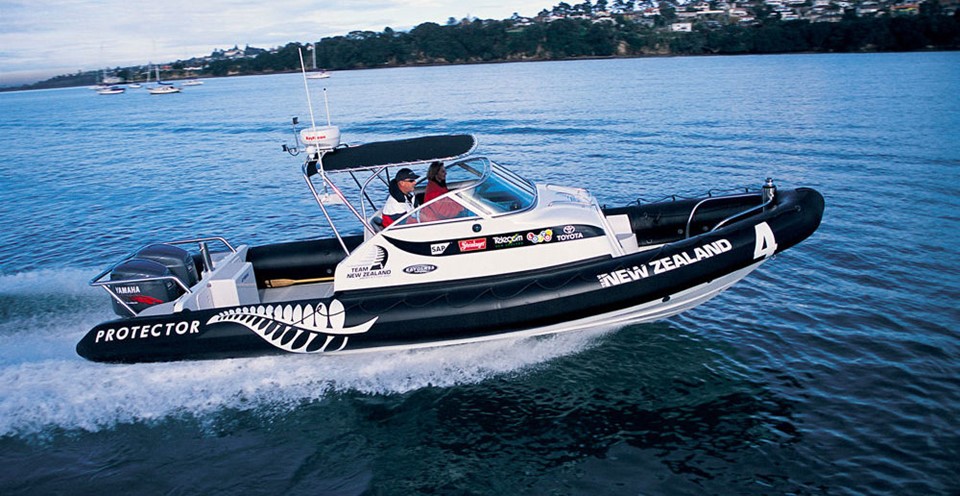 In 1964, the British Royal National Lifeboat Institution (RNLI) had a problem with their lifeboats. They were built using fabric and inflated, making them buoyant and light, but they often suffered heavy wear and tear and quickly developed punctures when they ran ashore.

To try and fix the problem, they started developing an innovative craft with large inflatable buoyancy tubes and a rigid plywood hull. After a great deal of experimentation, RNLI changed the course of boating by developing the first ever concept for a rigid inflatable boat (RIB).

There were several iterations of the RIB after that first attempt, but one of the most significant came in 1997 at the bottom of the world when a chap called Tony Hembrow had an idea.

THE EARLY ORIGINS OF THE RAYGLASS PROTECTOR RIB

Tony Hembrow is the founder of Rayglass, and had been developing fibreglass boats since 1985 in Pakuranga, Auckland.

Tony had a vision of building a RIB that was more practical and attractive. To do so, he’d use the legendary Rayglass hard sided hull on the Legend 850, which had built a reputation for superior rough water performance and handling.

Soon after Tony had his vision, the company’s first RIB was born and named the Rayglass Protector 850. To get the brand off the ground, he appointed Lyndsay Turner as sales and marketing manager for the Protector. Over two decades later Lyndsay and Tony are still working together here at Rayglass.

The first Protector was powered by twin 150hp Yamaha outboards and was successfully sea-tested countless times on flat water. Tony and Lyndsay and a few other staff knew they were onto something special a few weeks later when they put the durability of the boat to the test in a gale force storm.

When the Rayglass Protector was first built, RIBs weren’t a common or popular boat here in New Zealand, which made selling them a difficult challenge.

Tony and Lyndsay had pioneered the development and sales of RIB boats and the Protector brand and proved the boats impressive capabilities as a utilitarian work boat using this as their main sales focus. These include:

The team decided these boats had an obvious appeal to organisations like the New Zealand Coastguard. Lyndsay and Tony set out to get their first orders, eventually selling new fleets of Rayglass Protectors to the Auckland, Northland and Waihi Coastguard stations and the Auckland Regional council as patrol boats.

Word of the Rayglass Protector got out and eventually it became a popular vessel for the entire Royal NZ Coastguard nationwide.

THE RAYGLASS PROTECTOR AND THE AMERICA’S CUP

In the year 2000, the Rayglass Protector solidified its reputation as one of the best work boats in the world when the America’s Cup was held in Auckland.

Protectors proved extremely popular as support boats for many of the teams during the competition. They were favoured for their rough water handling, ability to pull up alongside yachts without causing damage and their large deck spaces with ample room for spare sails, race crew and support crew.

Since then, the Rayglass Protector has been the go-to support boat for many America’s Cup officials and teams. That includes the upcoming 2021 competition, for which we’re supplying 24 Protectors ranging from 9 to 12.5 metres in length.

Popularity with the global superyacht fraternity followed Rayglass’s America’s Cup success, due to their practicality as specating vessels for the America’s Cup races, as well as everyday use.

THE VERSATILITY OF THE RAYGLASS PROTECTOR SERIES

Since the Rayglass Protector’s breakout success with the Royal NZ Coastguard and during the 2000 America’s Cup, it’s now found several other uses, both recreational and industrial.

The boats are now used by the military, police, customs officials, media, divers and by keen fishermen. They’re often used as chase boats, island hoppers, superyacht tenders and much more due to their class-leading capability and easy practicality.

More than two decades after they first worked together, Tony and Lyndsay are still here at Rayglass in Mt Wellington.

If you’re keen to talk boats or find out more about the Rayglass Protector series, drop in to our showroom to experience them for yourself.

Protector 380 Chase - The Flagship of the Chase Range

Protector has built its reputation on crafting capable, comfortable, high performance vessels and the Protector 380 Chase is the ultimate example o...

Rayglass has released a range of new Protectors in the lead up to the 2021 America’s Cup in Auckland. The new 250 Chase and 310 Targa are the firs...

As you read this, the team at Rayglass are busy building 24 high performance Protector RIBs for a special collaboration between NZ Coastguard and t...